Water Restrictions No watering every day from 10 am to 6 pm. Read more...

Washburg-Crosby Company (WCCO) Radio at 830 Kilohertz (Kh) is a familiar household word in this part of the northwest. On October 2, 1924, when it opened to the public after a silence of 2 months under the call letters of WCCO Radio. The Washburn-Crosby Company had been persuaded by executives of the Twin Cities Civic and Commerce Association to take over the old WLAG "Call of the North" station located in the town's Minneapolis Oak Grove Hotel. The old WLAG would be known by its new call letters of WCCO. 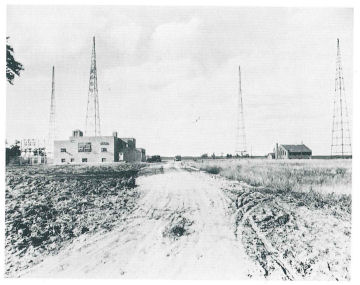 The new highly-powered radio station would have 10 times the power of earlier radio stations in the Twin Cities and broadcasted on a daily basis. It was to be advertised as a Gold Medal Station. A new era in radio broadcasting was about to begin.

The original WCCO Radio Transmitter Building was built 2 miles southeast of Anoka, Minnesota, in 1924. Later on, the location of the WCCO radio transmitter would be known as Anoka Township, then the Village of Coon Rapids, and finally in 1959, the City of Coon Rapids. WCCO radio studios were leased and located on the 12th and 13th floors of the new Nicollet Hotel in downtown Minneapolis and the broadcast transmitting facilities and twin aerial transmitter towers in early Coon Rapids made WCCO the largest radio station west of the Mississippi in 1925.

The ground on which this new station was built occupied a 500 foot by 700 foot tract of land near Anoka, surrounded by farmland and adjacent to old Highway 10, which is Coon Rapids Boulevard today. 2 aerial towers, each 200 feet high, at either end of the first transmitter building with the Gold Medal Radio Station sign in between would transmit the 1st new WCCO radio signal on March 4, 1925, with 5,000 watts of power. Local programs, especially musical entertainment and news interviews, were carried along with commercial programs from the NBC Network in New York. WCCO later attempted to exert its commercial independence, leading to an open break with NBC.

A new 50,000-watt transmitter--the maximum power licensed in the United States--was completed on 10 additional acres of land by September 1932 at the present location with the 1st of a new type of transmitting equipment built by Western Electric.

These newer facilities would make WCCO Radio Station one of the most powerful clear channel broadcasters in the United States, complete with special emergency and remote broadcast communications apparatus.

Clear channel means that only 1 full-time radio station could operate on the assigned frequency of 810 kilocycles as in the case of WCCO by order of the Federal Communications Commission (FCC). 2 new additional 300-foot transmitter towers were added to the local skyline in the 1930s to boost the broadcast radio signal, sending it as far as Honolulu, the Virgin Islands, and Mexico. In 1932, the CBS Radio Network exercised its option with General Mills and become the sole owner of WCCO for a total investment of $450,000.

In 1937, the Columbia Broadcasting System added WCCO to its list of star radio stations, where it has earned its reputation ever since.

The station remained in the Nicollet Hotel until April 1938, when WCCO radio moved to 625 2nd Avenue South into the 4th floor of the old Elks Club Building with a large auditorium for special shows. It has remained there ever since. That old Elks building is now the WCCO Radio Building.

1939 brought not only the New York World's Fair and the beginning of World War II in Europe, but a distinctive new form on the WCCO landscape in Coon Rapids in the configuration of a new radio transmission tower more than twice the height of the earlier towers and 200 feet higher than the famous Foshay Tower landmark in downtown Minneapolis. That tower is still presently in use 24 hours a day.

The present familiar WCCO radio antenna in Coon Rapids was constructed in 1939 to allow the station to serve even more listeners. This new "vertical radiator" type antenna reaches a height of 654 feet. That same year the FCC reallocated all the radio channels in the United States and WCCO was changed from 810 to he present 830 Kh today at the present dial location.

Since WCCO Radio celebrated its 50th anniversary on the air in 1974, the City of Coon Rapids and all of Minnesota and the great northwest region have enjoyed the benefits of being good neighbors to each other for these many years. The radio has featured:

The radio station has also hosted personalities such as:

Our days and nights have been filled with the kind of professional quality in good humor, wit, and the public service we've come to expect on WCCO Radio. WCCO Radio's strong signal is beaming to the rest of the country and indeed to much of the free world from its class A-1 all clear channel and its 50,000-watt transmitter tower facilities right here in Coon Rapids, Minnesota.